Faith Stories: Walking This Path Together

Faith Stories: Walking This Path Together

As I think about this Walk that we are on, our capital campaign and the two-phase building project, I am grateful for our St. John’s community. When I look back over the years, realize that God has changed us along the way. He has changed from a self-centered congregation to an others-centered congregation. These are two terms I learned in my Companions in Christ group. We are studying a book titled A Good and Beautiful Community. In it, Dr. James Bryan Smith gives an example of a self-centered congregation. He said it was an aging community who knew they needed young people in their congregation to survive, so they asked him to bring the college students to their church, he could teach a Sunday school class there, and they would make a contribution to the campus ministry program where he worked. It worked a little while but the students stopped coming to worship, and the church stopped their donations.

Dr. Smith goes on to describe another experience where a congregation, an others-centered Congregation. The group said their church would like to reach out the college students in their area. They asked Dr. Smith what the students needed. He said that students, of course, like to eat and they like to make connections with other people. So the church began offering meals for college students, and as they ate with the students, they came to know them. They were interested in their lives, and they exchanged lots of hugs. This congregation became the famous Chapel Hill UMC in Wichita, Kansas.

How does this relate to St. John’s? Well, I have noticed a change over the last several years. I think the turning point was when the children’s center closed. When you think about it, we just offered a place for the school. We were not personally involved as we were 40 – 50 years when we began the Mini-School. God closed that door, but he opened a window.

He gave Theresa Sandifer a vision, He said, “Feed my sheep.” Under her leadership, we read books, learned about the operation of a pantry, and three years ago, The Shepherd’s Market opened. What’s the difference? All of us at St. John’s are involved. We volunteer; bring food on Grocery Bag Sunday, and advocate, Jay’s term, for the importance of the pantry. Not only are we feeding our neighbors with groceries and meals, but we are connecting with them by getting to know them, and we listen to their stories. We share lots of hugs, and we even share communion on Tuesday mornings. We are feeding our neighbors both physically and spiritually.

And that’s not all. Did you notice all the missions that were highlighted at the Mission Fair a couple of weeks ago? We are reaching out to the community with Opening Doors, the Wildwood initiative, Angel tree and GRACE Camp. And of course, our youth and children’s programs, for example the Trunk-or-Treat event next Sunday will attract many of our neighbors. We are also reaching out to the world with our missions to India, Mexico and Cuba and the support of missions through the UMW.

As far as this building project and capital campaign are concerned, I can see and feel the excitement and commitment of the whole congregation. Over the past 3 years, many have worked, studying the needs of the congregation, both for ourselves and for our outreach to the community. Under the leadership of Danielle and Phil and Jay, we now have definite plans and are ready to go. If you were at that church conference a few weeks ago, when we voted unanimously to go ahead with the project, you felt the excitement also. 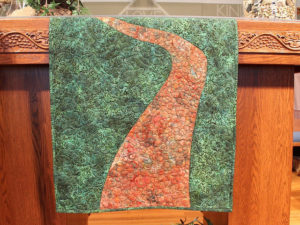 I would like to share one other way I see God leading me. I have had the building program and capital campaign on my prayer list for many months. One morning last summer, God said, “Why don’t you make a set of Paraments for the campaign?” Paraments are the cloths that hang of the Communion Table and here at the pulpit. So over the next few months, God has led me to create this path, representing the place we are walking on our journey. As I was quilting the path, God spoke again. You see, I made stones in the path by quilting circles. There are some large stones, many medium sized ones, and some smaller circles. As I am sewing, God said, “That is just like the capital campaign, there will be some large contributions, but many, many medium-sized contributions over the next three years, and there are those important smaller gifts, the $5-10 pledges, which will all add up to the $1.5 million.

God is leading us, St. John’s, and we are walking on this path together.

The Witness committee is looking to record your experiences working with St. John’s ministries or other activities where you’ve experienced God’s presence. We’ll be collecting the stories and sharing them regularly via email, on our website and our newsletter as space allows. You can either send in a short story or just have a conversation with us and we’ll do the writing. Contact Kathy King (brcking10@gmail.com) for more information.
Read the Faith Stories we have collected so far.

Be Welcomed. Be Loved.

We are a Christian community called to share our gifts through worship, witness and service so that others will know God and become disciples of Jesus Christ.

Phone: 225-766-4594
Email: office@stjohnsbr.org
The church office is open 9 a.m. until 12 p.m., Monday through Thursday, and some staff continue to work from home. Please call ahead and make an appointment.